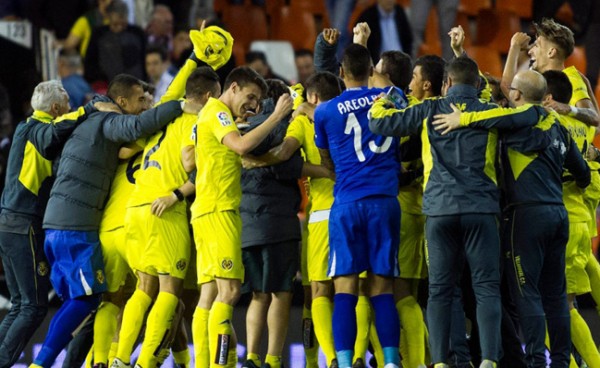 The Pamesa Cerámica sponsored team is in the Champions League! Villarreal secured their place in next season’s Champions League after defeating Valencia by 0-2 at the Mestalla with goals from Samu García and Adrián. The Yellows -with up to ten changes from the Liverpool game- put in a really good performance from start to finish in the derby, in which they did not only contain the black and whites, but also knew how to make the most of their chances to take the three points and thus secured their presence in Europe’s biggest competition for next season.

Both teams played at a very high tempo in the opening minutes. Valencia keeping possession more and Villarreal organised and ready to break dangerously as they won the ball back. After coming close a few times, it was the Yellows that were the first to strike.

Villarreal manager, Marcelino García Toral, said that achieving their objective is a tremendous achievement for a team like the Submarine: “It’s a real success. Budget-wise, we’re the seventh team in the league. This season is one to remember. This squad doesn’t have any amazing individuals, but we’re 90 minutes away from our first European Final in history and we’ve qualified for the Champions League after finishing fourth. It’s an extraordinary achievement”.