The solidarity project United by Hope celebrates its main activity with a charity match between the Submarine and Celtic FC today at 8.45 pm in El Madrigal stadium.

Pamesa Cerámica supports this campaign, which has been promoted by the Celtic Submarí supporters group on their 10th anniversary. The Project has the goal of collecting the financial resources to launch a specific research in La Fe Hospital of Valencia, along with ASPANION, that will help improve the life quality of the kids that overcome cancer and avoid the possible sterility caused by the strong medical treatments.All the money that is raised during the match will go to the funding of the charity project.

Buy your ticket, we all win!

If you can’t come, collaborate with the project

Villarreal CF and the “Celtic Submarí” supporters have decided to launch a Fundraiser for those who can’t attend the match.

In addition, they have launched an official website where everybody can make a donation. Fans can choose if they donate the amount they prefer or closed amounts of 5, 20 or 100 euros here: http://villarrealcf.es/unidosporlaesperanza

The dream of Gohan: football player for a day 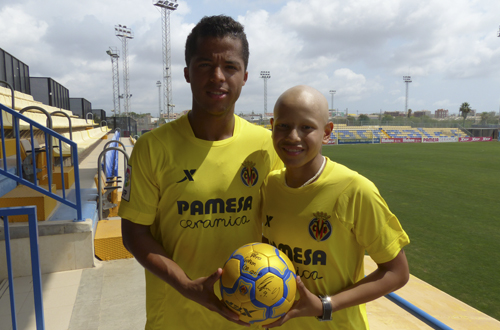 One of the children of  Aspanion –The Valencian Region Association of Parents of Kids with Cancer-, Gohan, will be football player for a day in the charity match. The 13-year-old child will put himself in the footballer’s shoes and will be one more of the Yellow team.